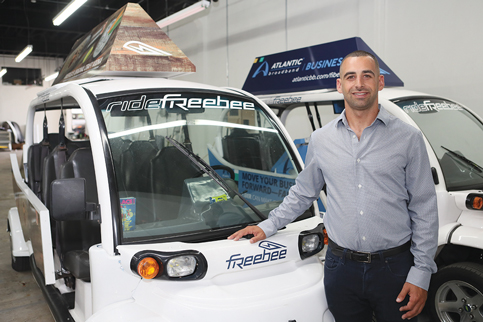 Freebee, the Miami-born on-demand service that gives free short-distance rides to travelers across three South Florida counties, will add a fourth county and at least one more Miami-Dade municipality to its service area this year, Managing Partner Jason Spiegel said.

On July 22, he said, Freebee and Palmetto Bay will announce that the company’s vehicles will soon start rolling on the village’s streets – the southernmost service area yet for the company in Miami-Dade.

“The contract has been signed,” said Mr. Spiegel, the company’s co-founder.

Less than two months later, Freebee will introduce its services for the first time in Palm Beach County when it hits Delray Beach on Sept. 3.

“We just won the contract,” he said last week.

Next year, the ride-hailing company will also provide services during Super Bowl LIV.

“I’m happy to say we worked out a deal with them,” he said. “Freebee will be the official green transportation for [the Super Bowl] in 2020.”

Freebee’s business model today is much different from when the company launched in 2012.

Freebee began as an ad company, with transportation serving as a hook to captivate audiences.

Sponsors like Coca-Cola, T-Mobile and Jack Daniels, among others, paid to “wrap” the company’s five-passenger electric vehicles, which resemble golf carts, with their colors, logos and slogans, and the company offered passengers exclusive, sponsor-specific deals.

Such ad wraps are still on the company’s fleet today, which recently expanded to include nine-passenger electric shuttles – two of which will serve Palmetto Bay, he said.

But Freebee now makes most of its money through subsidies from local governments, as well as from local events including the Miami International Boat Show, Art Basel, SwimShow on Miami Beach and several food and wine festivals.

Riders in those areas need only download the Ride Freebee app, request a ride and wait for it to arrive. Tipping drivers is optional but encouraged.

Mr. Spiegel told Miami Today that while his immediate focus is to expand Freebee to cover all of South Florida, the company’s vision is national and international.

“And that national vision [will begin to be realized] within the next 12 months,” he said.

Freebee’s growth prospects in Miami-Dade skyrocketed in December, when county lawmakers voted to allow funds from the countywide transit sales surtax known as the “half-penny” to be used to pay for on-demand transit services.

Cities in Miami-Dade, which get nearly a quarter of the roughly $300 million the tax generates yearly, have in several cases applied their cut of the funds to bankroll trolleys and other localized transit solutions.

Mr. Spiegel said that even though those funds can now go toward paying for his company’s services, some cities still can’t afford it.

“We haven’t had a community that said, ‘No, we don’t want your service,’” he said. “We’ve had challenges with some that don’t have the funding to [afford] an operation for any type of transportation, let alone Freebee. It’s been more of a funding challenge than anything else.”