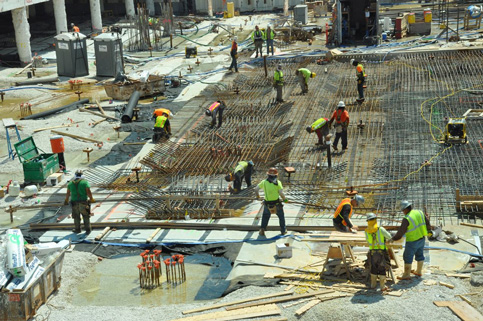 As unemployment in Miami-Dade fell slightly in May to 11.3% from 11.8% in April at the peak of the virus-induced shutdown, sunshine bathed one industry: construction jobs hit an all-time high here.

Construction rose to 54,800 jobs in the county in May, the most for any month in US Bureau of Labor Statistics records, up 3,800 from April and 1,600 more workers than a year earlier.

The largest loss was in leisure and hospitality, which has felt the brunt of the county’s virus-induced job losses. The sector’s jobs were down 37.3% from May 2019, a relative improvement on 45.4% in April, as employment rose from 80,300 persons to 91,800. But as recently as March, as the virus closings began, the sector paid 142,700 workers here.

Jobs in both professional and business services and the areas of trade, transportation and utilities were off 8.7% year over year, Education and health services had 7.2% fewer jobs, though it added back 2,400 from April to May.