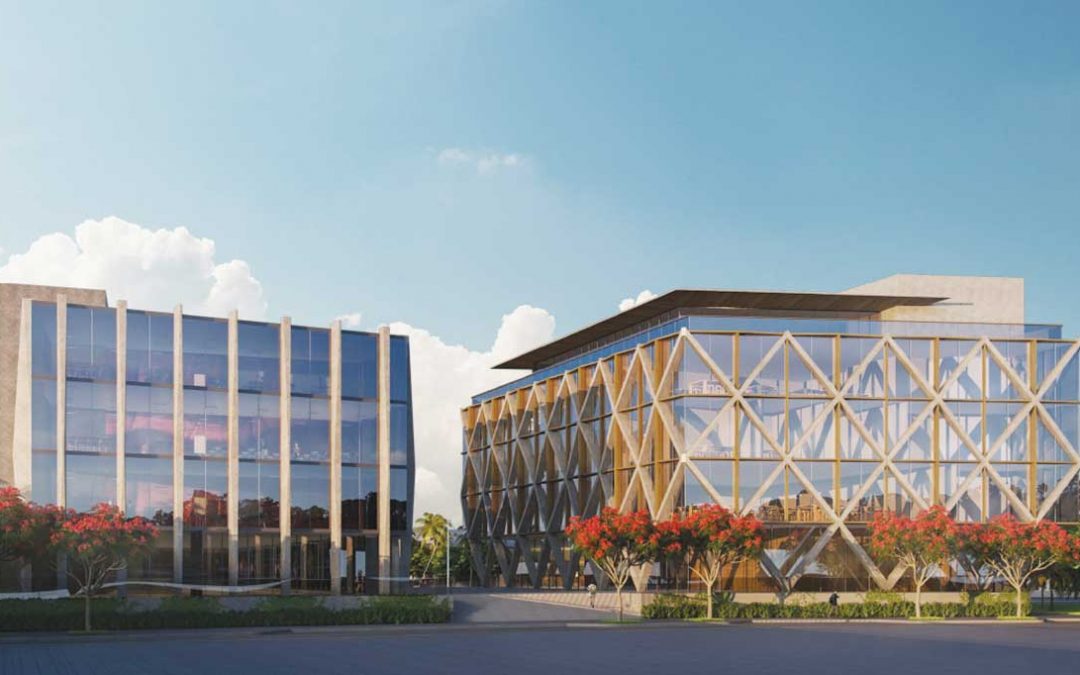 The Miami River Commission is expected to review a redesigned fashion studio and school on riverfront land owned by Miami-Dade County when it meets May 6.

New York fashion designer Naeem Khan plans to build a studio for design and manufacture at a county-owned site at 1175 NW South River Drive under his long-term lease with Miami-Dade County.

The project has evolved since first being considered in 2015.

Revised plans in late 2017 amended the site plan to include a vocational school. At that time, Mr. Khan explained that as the project became more defined he began to wonder how to include the community in his venture.

The idea of the school was born, he said, to help teach a new generation the art of fashion design and the workings of the fashion industry.

The site fronts on more than 200 feet of the river’s south shore, and dockage is planned for the entire length, along with a 25-foot-wide public riverwalk.

The latest version of the plan for Naeem Khan Studios was reviewed March 20 by the river commission’s Urban Infill and Greenways Subcommittee.

Committee members reviewed emails from the developer’s team and renderings from the previously presented project and new materials showing the latest plans, with two major changes: the studio building has an added floor, coming in at five stories; and there are changes to exterior wall materials and the façades, showing much more glass.

Documents submitted by project architect Alfonso Jurado show the studio building with a total of 45,420 square feet of uses, and the school building coming at 34,660 square feet, for a total of 80,080 square feet.

Zoning would require open space on the property of at least 2,052 square feet and the latest site plan shows 21,169 square feet of open space will be provided.

Parking would include 42 spaces off-site by lease, and four on street spaces.

The developer’s team emails state, in part, “… the design was slightly modified but that the waterfront standards, Riverfront dimensions and overall program remain the same… As promised I have included the Riverwalk Details comparisons from 2015 and 2017 – the walk remains at 25 feet wide. I have also included a site plan comparison … you will see the 2017 site plan includes the off-site parking under the bridge.”

The developer’s team indicated progress has been made on two earlier conditions set forth in resolutions by the river commission:

■Securing Florida Department of Transportation (FDOT) permission to construct the public riverwalk connector to the west on FDOT right-of-way at the 12th Avenue Bridge, and removing the storage lot beneath the bridge.

Subcommittee Chairman Jim Murley suggested the full river commission vote to re-affirm its previous unanimous recommendation on this project, and continue to find the proposed development consistent with the Miami River Greenway Action Plan and the Miami River Corridor Urban Infill Plan, subject to final success in securing the vessel requirements and the FDOT permissions.

Mr. Khan’s team has promised to extend the riverwalk under the 12th Avenue Bridge, connecting with a pedestrian staircase on the west leading back to the on-road Miami River Greenway.

The riverwalk will also have access back to the road on the east.

The plan includes an improved seawall, with materials shipped to the site and finished product shipped out via the river.