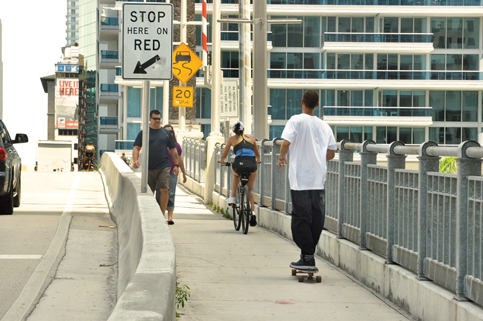 It will probably take until the end of next year, but gates are on the horizon that will prevent pedestrians from crossing the Brickell Avenue Bridge while the tender is trying to open it.

“The Brickell Avenue bridge rehabilitation project includes the addition of pedestrian gates,” said Pablo Orozco, structures maintenance engineer for District Six of the Florida Department of Transportation, via email. “FDOT has a contractor on board with a construction start date of Nov. 6, and the estimated construction time is 300 days. Whatever issues we had during design were solved. We do not foresee any issues during construction.”

It was suggested in 2016 that pedestrians might be part of the gridlock created when the Brickell Avenue Bridge is raised. When the bridge tender sounds the alarm, pedestrians are supposed to stop and wait until the bridge span lifts, vessels pass through and the span returns to its base.

But many don’t want to wait and charge across the bridge anyway, said a source familiar with marine and traffic issues who didn’t want to be identified.

“They know the bridge tender can’t engage the mechanism to lift the span until everyone is off the bridge,” the person said at that time. “That can add 10 minutes to the time that traffic has to stop.”

Various measures have been discussed to extinguish the problem, including having police officers or public service aides, such as those who worked in the Downtown Development Authority’s White Glove traffic program, on hand to ticket offenders. But the situation has persisted.

In July 2016, the downtown authority, which has historically tackled what it says are improper bridge openings, added among its requests to the state transportation department and the US Coast Guard a provision for a stop bar or gate to deter those who can’t wait a few minutes to cross the bridge on foot. It’s hoped that preventing them from crossing against the signal will help alleviate traffic jams for everyone else.